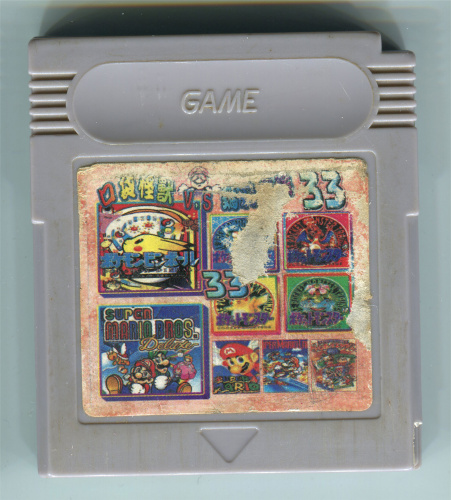 Looks JY Company-esque but not confirmed. Uses the Last Bible menu common to their later GBC carts, but with an earlier palette which is pretty unreadable on a GBC screen without very good lighting.

Even with a fresh battery, it doesn't seem to want to hold a save on any game, so there may be a fault with its RAM. This might also explain the two non-functioning Mario games.

Strangely at one point I was able to get it to boot up to a 23 in 1 menu omitting the Pokemon games and some others. It's a common tactic among cart makers to have an identical board/ROMs support multiple variations by setting jumpers, but in this case I suspect the 23 in 1 version requires one less ROM chip to be populated - the Pokemon games are pretty big to just have them sitting there redundant.