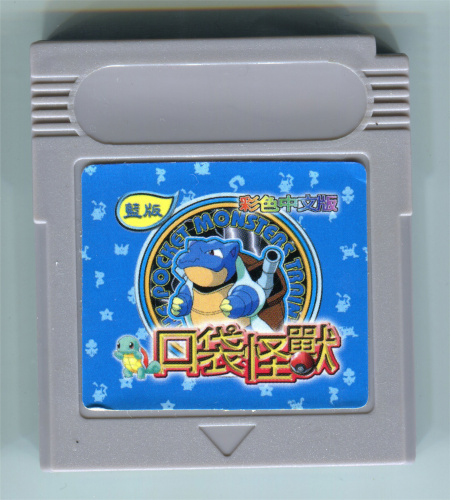 Translation of the US Pokemon Blue to Chinese. This particular translation is really common and still shows up on Chinese carts to this day, but I think this might have been its origin, or at least an early release. Seems quite sloppily done, the title is plain, the name entry screen only allows you to enter numbers 0-9 and the Pokemon are all called things like "PKMN009".

The title screen is written in Simplified Chinese whereas the label and in-game text are written in Traditional Chinese.

Boots with a corrupt Nintendo logo on a GBC but then works fine. Probably using hardware designed to swap out the logo for a custom one in an unlicensed game, but this is a translation of a licensed game so it doesn't have an alternate logo and just contains random data in that space instead.

Unlike most Game Boy carts, the shell doesn't have a screw and just clips together.