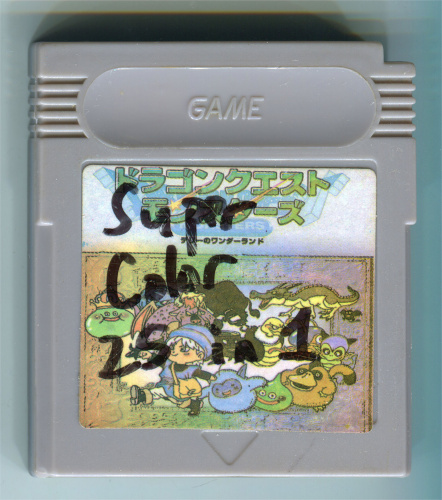 Obviously the title written on in marker isn't original. I'm not sure if the cart was originally distributed with just the underlying label, e.g. just a faded version of the Dragon Quest Monsters boxart and no indication that it's a multicart? There may have been embossed text that faded, or maybe it's a misprint or the wrong label was applied...

The menu names it as "SuperColor 25 in 1 (TRUE 40M) No Repeat JK059". I suspect it might be a JY Company deal given its similarity to some of their earlier multicarts but can't confirm that at this point.

Notably I think the three colour games here are all Japanese GBC launch titles so this probably came out pretty quickly after the release of the system. Might explain the lack of a proper label.

Menu has what looks like a fire effect at the bottom so I'm gonna name it the "fire menu".

PCB code: LT871008C with "35-" below. Distinctive copper battery holder. Going by the ROC calendar that would place the PCB date in October 1998, the same month as the Japanese GBC release (although the PCB may have been designed long before this specific set of rom chips were made)