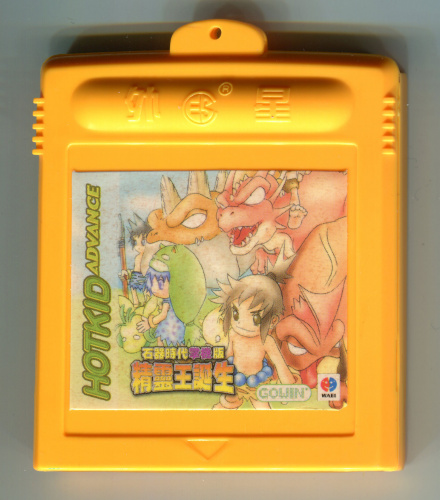 Here's an interesting one. One of the last games released by publisher/developer Gowin, a spinoff platformer based (with a legitimate license, as far as I can tell) on the sometime-popular online game Stone Age. This was released by Gowin themselves in Taiwan, but in mainland China it ended up being released through Waixing, in their distinctive yellow carts with mega-annoying yellow tab thing that prevents them from fitting in standard GB cart cases. And yet the packaging seems to be 100% original Gowin, not crediting Waixing at all - even the label is still sized for Gowin's carts rather than Waixing's.

Have you not dumped this one yet? I can't find any info about it elsewhere, and I'm at least interested in reading more about it. I tried to look it up myself, but only found a top-down, turn-based RPG, not a platformer.

Hey, do you know what is the difference between this version and one released in green? I'm trying to track down Taiwanese and Chinese GB games, but it's hard, especially to tell which are GBC games but compatible with GB.