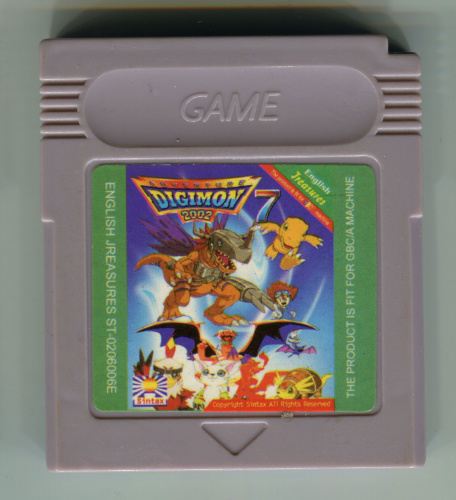 One of Sintax's many earlier GBC platformers which are basically just graphics swaps of the same straight clone of Super Mario Bros DX. The label here uses the same logo as BBD's Digimon Adventure 6, but in-game it's referred to as "Digit Dinosaur 7: The adventrue of devildom". Digimon Amethyst and this thing are also the same exact game with different title screens. All versions have Bub from Bubble Bobble as the "small Mario" form and Agumon as "big Mario".

PCB is marked US1018A, it looks otherwise identical to this Donkey Kong 5 one except that one is missing the ID. Most other Sintax PCBs seem to follow a similar design. The grid pattern on the back left is also a common element. ROM is a glob on a sub-board stickered "641 16M AS1039 CB57 L 7-27" - these stickers appear on other Sintax ROMs so probably mean SOMETHING to their factory, but it's nothing that immediately correlates to the game on the cart or its ID or anything.